Jason Silva is a media artist, futurist, philosopher, keynote speaker and TV personality. He is the creator of SHOTS OF AWE, a short film series of “trailers for the mind” that serve as philosophical espresso shots exploring innovation, technology creativity, futurism and the metaphysics of the imagination.

Shots of Awe has received more than 13 million views.

I truly fell in love with Jason’s project of Shots of Awe a while ago when it was at its beginning phase. Something resonated with me when I listened to few episodes and I couldn’t help it but watch all of the released ones. The whole idea was apparently born out of inner, unfed curiosity and quest for knowledge and answering questions about the nature of the Universe and Life itself in all its glory. Jason seems to be interested in… pretty much  e v e r y t h i n g  and is driven by inner urge to “know it all”.. So as you can see – I could relate to him pretty easily 😉 Watching his short 3 min top youtube vlogs became addictive to me at one stage and I am always excited and happy to see  new release. It’s a truly magical feast for the eyes, ears, mind and Heart. Amazingly sensual ride every time I tune into SHOTS OF AWE videos list. Each video is also charged with some meaningful philosophical quotations that literally make you stop, drop everything you do and THINK.

Without a doubt and slightest hesitation I would make those short films a must see and played at schools initiatives. I am sure it would catch children’s’ and teenagers’ attention at once, without making them bored or distracted too soon – as each video is usually less than 3 min long – too little time for boredom to sneak in. Although they are short in nature,  yet they brilliantly cover a a great deal of information and deliver remarkable knowledge, often closing the entire Universe in a few minutes’ nutshell ;-). I am sure this project established in schools would greatly contribute in development of curious minds interested in science, biology, evolution, consciousness and philosophy in children and the ability to question reality while getting on a path of quest for answers. After all, isn’t that what education should be all about? 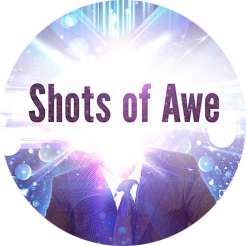 I believe watching the videos, so full of meaningful messages by quoting world’s best poets, writers, philosophers, scientists and intellectual personalities from all walks of life will inspire you in ways you don’t even imagine you can be inspired and moved. I am sure something will crack open in one’s mind and leave it open to new possibilities and stepping out the comfort zone, making a substantial masterpiece out of your life and escape ordinary. Coz after all… why not?

Here are few videos to befriend you with the Project and step into the New Age of Wonder:

“To entertain such ontologies is to re-contextualize one’s self as a marvelous conduit in a timeless whole, through which molecules and meaning flow, from nebulae to neurons and back again.” – Tim Doody

“A single thread of self generation ties the cosmos, the bios, and the technos together into one creation. Humans are not the culmination of this trajectory but an intermediary, smack in the middle between the born and the made… The arc of complexity and open-ended creation in the last four billion years is nothing compared to what lies ahead.”
-Kevin Kelly

“If properly harnessed, there’s enough sunlight that falls on the earth in just one hour to meet the world’s energy demands for a whole year.”

“We are as gods and might as well get good at it.”
Stewart Brand

“Shamans… Those ecstatic technicians of the sacred” Erik Davis.

“Follow your bliss and the universe will open doors for you where there were only walls.”

“Death has become an imposition on the human race and is no longer acceptable.” -Alan Harrington, ‘The Immortalist’

“If the love object is divine perfection, then one’s own self is elevated by joining one’s destiny to it… All our guilt, fear, and even our mortality itself can be purged in a perfect consummation with perfection itself.”
-Ernest Becker

Enjoy the videos and if convinced enough, make sure you watch all of the released ones up to date from Jason’s youtube channel. Pretty good staff and cool ideas – to say the least 😉

With Love and Curiosity,